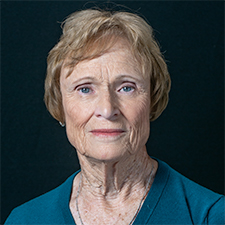 Physical activity and sports were always an important part of Brenda Davis’ life.

“When I was young, there were very few sports for women, except in private clubs,” says Davis, now 78. “I ended up becoming a serious swimmer at age 12, so from 12 to 20 I swam year-round with only two weeks off a couple times a year. It was serious athletics – like gymnasts do and like many women nowadays – but in those days, that was unusual.”

Given her background as a world-class athlete, Davis never suspected she would be at risk for osteoporosis, the degenerative condition marked by weakened bones that break easily. She didn’t realize that her training regimen that was building her muscle strength and stamina also was suppressing the release of estrogen, which triggers bone growth in the years around puberty.

“I wouldn't have my period for sometimes five months. My nutrition was excellent, but it was a hormonal issue,” Davis says. “At that time, doctors thought it was very normal, no problems."

Davis went on to a career as an educator and instructional consultant to corporate and government clients. She also got involved with American Bone Health, a nonprofit organization that educates consumers on osteoporosis and fracture prevention.

I was 60 at the time, and someone I knew that was on the board of American Bone Health said to me, ‘You're thin, and you're white, which makes you prime candidate. You need to be tested.’ I said, ‘I can't imagine why: I'm very healthy, no physical symptoms.’

Davis went in for a bone density test, which showed she had low bone mass, also called osteopenia, in her spine, hip and wrist. A few years later, after a cancer diagnosis, she underwent three months of chemotherapy and six weeks of radiation treatment. This led to more bone loss and a diagnosis of osteoporosis in her left wrist, hips and lower back.

“I probably had low bone mass most of my life,” Davis says. “After menopause, it became an issue.”

Now the President of the Board of American Bone Health, Davis has a special interest in bone growth among adolescent athletes.

“The hormones get disrupted with female athletes in that teen age group,” says Davis, describing a condition now known as Athletic Energy Deficit. “All the energy is going into the muscular activity as opposed to hormonal issues. We have found that girls involved in sports year-round tend to miss their periods, and that's a time when 30% to 60% of your bone is formed.”

Davis has taken medicines to treat her osteoporosis, including Fosamax, Prolia, and now a yearly infusion of Reclast, but the lifelong athlete believes deeply in the power of exercise to maintain her bone health.

“I’m in the gym 4 days a week – stretching, weight bearing exercise – and I always have,” she says. “So exercise more than anything has helped stall the progression of osteoporosis. At this point the only fractures I’ve had – two in last 10 years – were from a trauma, they were not low-impact. One was car accident.”

She does occasionally feel the effects of osteoporosis in her daily living, however.

“Am I living a full life? Considering my age, yes,” she says. “I went to the neurologist, and he said, ‘Yes, you have degenerative disks, and you have a compression fracture in your lumbar region.’ Lifting more than 30 pounds of weight causes pain in my back for several days. I know there are multiple tiny fractures but nothing debilitating to this point. I know better than to get on a bike – I think that would be dangerous. I don't run, and I don't lift heavy objects, but I still lead an active life and ski and play golf.”

Along with exercise and nutrition, Davis stresses the importance of screening to identify people at risk of osteoporosis and fractures.

One of keys is early diagnosis. I think, in hindsight: 1) if girls are exercising heavily, their doctor needs to educate them if they're not having periods. Check their nutrition and hormonal balance. And 2) I believe it would be ideal if women in their early 30s could have a baseline bone density test, which would give doctors something to compare to later as they go through menopause.