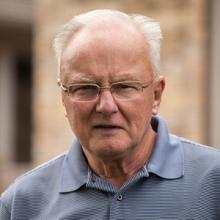 David Kirk, aged 66 is a retired school principal who lives in Ontario, Canada.

A year and a half before retiring at age 52, David fell from the lower rungs of a ladder. It wasn’t a big fall, but it had huge repercussions. He suffered serious compression fractures of the vertebrae and was hospitalized for over a week. A DXA (dual-energy X-ray absorptiometry) scan to measure bone mineral density revealed that David had severe osteoporosis.

I searched for a reason as to why I have osteoporosis. I’m a non-smoker, consume little alcohol, have a healthy diet, and I’ve always exercised regularly. However, I later discovered that as a diabetic, I am at increased risk for osteoporosis and fractures – perhaps this was a contributing factor.

After being discharged from the hospital, David was not allowed to do much of anything for several weeks - primarily because of some hemorrhaging around the spinal cord and fear of paralysis. Married, with two children, he had been used to a very busy lifestyle. Suddenly, from a 60-hour work week and a busy family life that involved driving two young boys back and forth to hockey practice, he was reduced to looking at four walls and restricted movement. An avid curler, David had to give up this hobby for the next year and a half. He could not attend the boys’ hockey practices or games, and was unable to drive for a period of time.

Several months passed before physiotherapy could begin, but it felt like the healing process was progressing at a snail's pace. David was provided with a steel body brace while in the hospital and as this helped tremendously he wore it for six months and gradually stopped using it.

I was in the worst pain in my life to date, as I had not experienced any broken bones before this time. I was also on lots of medication, including strong pain killers. This was a concern for me and I was greatly relieved to be off the pain killers after six months. Emotionally, it was a very frustrating and difficult time. I was very fortunate to have the strong support of family, friends and colleagues and this really helped me through the challenging recovery.

David asked for a referral to one of Canada’s most well-known osteoporosis specialists, Dr. Jonathan Adachi. Under his care he was prescribed bisphosphonates and thanks to his own great personal determination, David has recuperated his health and is, remarkably, no longer considered osteoporotic based on his bone density measurements.

A swimmer all his life, David was encouraged to swim again after he ceased his physiotherapy. It was difficult at first, but he gradually built up to his current 1 km five days per week. He also ensures he’s doing weight-bearing activity by walking briskly up to one hour per day, shovelling snow in the winter, and gardening from spring to fall.

In fact, my physical activity choices are more or less unrestricted, and I would say that my fitness level is great for my age.

David believes more men should be aware of osteoporosis and have a bone density test if they think they could be at risk. He has found that many men question the need for testing and some have been surprised to learn that they have a problem. To help spread the prevention message, he has worked with Dr. Adachi to promote awareness of this silent disease in men, speaking at patient awareness events, appearing on the major TV networks and being interviewed by key newspapers in Canada.