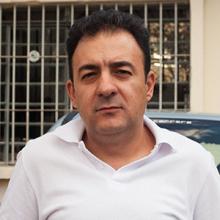 I was diagnosed in 2009 at the age of 39. I was disappointed, but at the same time relieved because I imagined it would be a lot worse. I had lost about 19 cm in height, but I wasn’t shocked. I thought it would be something worse like bone cancer. However, I was in constant pain and that made me angry. I had to change my life but on the whole it was okay, I could cope and I wasn’t traumatized.

It all began in 2008 when I was playing football and I felt a strange pain in my lumbar spine. I didn’t pay much attention to it as I just associated it with getting older. Then I started feeling pain in my knees. I was heavy at the time, weighing 80 kg, but I was only 1.68 m in height. I didn’t worry about the pain in my back, but I began to worry about the pain in my legs. I saw eight separate doctors and none of them managed to give me a diagnosis. Finally the eighth doctor referred me for an MRI and it was then that he saw that I had a micro fracture in the L4 vertebra. Because it was a compression fracture, I didn’t feel it when it fractured - only when I moved. That’s when the more aggressive pain started. The vertebrae were wearing down, so when I moved, the pain was aggressive. I could feel my ribs compressing against each other.

The simple things I was used to doing with respect to movement, which most of us take for granted – taking a shower, getting up and lying down, putting on my socks and shoes – I could no longer do. It was painful. While sleeping and turning in bed, I felt the pain. I couldn’t sneeze or cough. I would pray that I didn’t get a cold, it was horrible. I had to hold it in as much as I could, and then when I did cough I would hold my arms in an X over my ribcage to sneeze. That was the biggest problem.

This lasted for about a year in 2009. In 2010, I started taking medication and the compression slowed down and so did the fractures. So I think that medication strengthened the bone. Today I’m used to my state, and the pain has subsided. Now I can cough and sneeze, I can a run a bit if I need to hail a taxi. But I only got a diagnosis in 2009.

It was quick, a five-minute conversation with the doctor. Only five minutes! He looked at the MRI and almost instantly said, “There is something wrong here - let’s get you a densitometry test.” Fifteen days later, the results were in and they diagnosed osteoporosis. But it was only partial osteoporosis of the hip and the spine. I didn’t have anything in my arms, legs or hands.

I drank, I smoked. I still drink beer today, and sometimes even smoke. But for a while there, between the ages of 25-30 years, my drinking was quite excessive -I drank a lot of beer and I smoked a pack of cigarettes per day! Even to go to the bakery I took the car, not due to pain but due to laziness. From around the age of 32 years, I started living a calmer life. I lived a calm life for around 10 years, and now I smoke and drink, just beer. No strong alcohol - whiskey, tequila, wine, it’s not my cup of tea. But yes, I lived a life with risk factors. I sinned a lot (laughs)!

There was a period between the ages of 33–38 years where my diet changed. I was eating a lot of meat and a lot of pasta. I had a lot of family get-togethers due to a relationship I was in. So I gained a lot of weight, which in turn affected my knees. That’s where my hell began. I’m not sure if that’s why the compression started happening, because of the weight, but I’m sure it contributed. Obviously the bone was already weak due to osteoporosis, so the weight might have contributed to the compression fractures.

Today I weigh 58 kg, which is more in line with my height. During some time I had a pain in my groin, which then propagated to my legs, preventing me from walking. So that’s when the micro fractures happened in my hip, because of the osteoporosis. But today I no longer go through that. The medication seems to have controlled it but obviously did not reverse the osteoporosis. My current densitometry tests still show high risk of fracture. But it seems to have halted a bit. It hasn’t progressed. It’s stagnated, maybe even stopped.

It’s hard to tell how many fractures I have had but it is a lot. Almost all of the vertebrae have fractured, hence my crooked stance. That resulted in my kyphosis.

As incredible as it may sound, not much has changed. Obviously I can’t walk straight, so that aspect changed. So everything I used to do, like go to the mall, I had to cut back on. But in regards to work, it barely changed. I have always worked on the computer as an information technologist, so the only aspect I changed is that instead of carrying a printer or monitor, I roll it on a chair now. I’m not as agile as I was, and that is tiresome. Taking a shower, walking down a flight of stairs - I have to be more careful now. I can’t drive for a long time because sitting in the same position for long periods of time is painful.

So I have less freedom. I am scared sometimes of going into town, if I need to buy something, because I may need to move quickly to get out of the way of something, and I won’t be able to. I feel fragile. Watch a football game? I don’t even think about it! It’s crazy. Go to a concert? I can’t. So yes, that has changed. I stay home more often now.