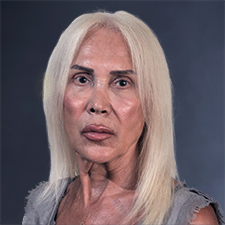 Yelda, a retired officer, has had several difficult years behind her. She has suffered through a cycle of painful, debilitating fractures, and has been diagnosed with severe osteoporosis. Osteoporosis causes the skeleton to become weak, fragile, and prone to fractures following even the most minor of falls or bumps.

As a smoker for over 40 years, and someone who had experienced early menopause at age 42, Yelda has two major risk factors which accelerate bone loss and point to the underlying condition of osteoporosis. However, until recently, she was unaware of her risk and did not seek a bone health assessment after her first fracture.

The first broken bone was just above the elbow - a distal humerus fracture which she sustained in her early sixties after an accidental fall at home. The fracture healed without any complications, and so Yelda continued with her daily life - unaware that she had osteoporosis and would be at high risk of more fractures in the future.

In 2015, Yelda sought medical attention at the Physical Medicine and Rehabilitation outpatient clinic after experiencing worsening lower back pain over the course of 4 months. Due to the pain, she was unable to do any housework or shopping. Doctors carried out a complete bone health assessment which included blood tests, a dual-energy x-ray absorptiometry (DXA) scan, and a lateral spine X-ray. The tests revealed that she had very low levels of vitamin D, mild spinal compression fractures (at T5 and T6) and osteoporosis at both the hip (T-score of -3.3) and spine (T-score of -3.5). As well as being given vitamin D over six weeks (50,000 IU/week), she was prescribed weekly alendronate (a bisphosphonate) and daily vitamin D and calcium supplementation. It was recommended that she return for follow-up visits at least once a year.

Three years later, Yelda visited the same outpatient clinic again. This time for rehabilitation after having fractured her right hip due to an accidental fall on skis! Recovery was difficult due to postoperative complications which led to prolonged bed rest. A DXA scan revealed that in the three years since her diagnosis, her bone density had further deteriorated, especially at the hip (T-score of -3,5).  She admitted that, because of gastric symptoms, she had not taken the prescribed oral bisphosphonate, and that she had also had problems taking the combined calcium and vitamin D effervescent tablets. Not surprisingly, blood tests indicated low vitamin D levels. The comprehensive rehabilitation programme included physiotherapy to improve the limited range of motion in the right hip, and postural and weight-bearing exercises to strengthen her muscles and bones. Yelda was also prescribed a new osteoporosis therapy (denosumab). After four weeks in the rehabilitation ward, she was discharged, able to walk using a cane as needed.

It hasn’t been an easy journey, but six months later Yelda is feeling much recovered and happy with her good medical care. She is now taking the therapy she needs to protect her fragile skeleton from the risk of further fractures. She is receiving comprehensive information about both her condition and therapy, as well as being encouraged to stick to her treatment and to attend the important follow-up visits for continued monitoring.

Yelda’s story reflects the common problem of poor compliance with medication, which is often seen in patients with osteoporosis and other chronic diseases. It is important for anyone who finds they are having difficulties taking a prescribed medication to discuss their concerns with their doctors so that an alternative can be found, rather than simply stopping the treatment as Yelda first did. Without therapy, Yelda’s bone density declined even more, and she sustained two, potentially life-threatening, hip fractures. These might have been avoided - saving her from much pain, long hospitalization and difficult rehabilitation.