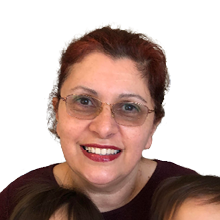 A practice manager in a general practitioner clinic for 37 years, Elaine Cotter, from Melbourne Australia, visited various doctors and specialists to investigate her back pain. Over a 3 year period, she endured ongoing and unexplained lower back pain and was prescribed various medications for chronic pain: anti-depressants and even sleeping pills to manage the pain. It was not until Elaine herself noticed symptoms common to osteoporosis that she insisted on a bone density scan, which revealed severe osteoporosis. Elaine was both grateful that she finally had an explanation for her pain, but frustrated and angry it had taken so long to diagnose.

Elaine was only 52 when she experienced sudden and severe pain after a minor twisting movement, while cooking in her kitchen. This started a long and difficult journey for Elaine, where her pain continued but the problem was not diagnosed.
Initially referred to the wrong specialist her pain was wrongly diagnosed as arthritic pain. Her pain persisted despite treatment, so later she was referred to a Neurosurgeon who could not find any neurological signs, and referred her to a Pain Physician. As there was no clear understanding of her issues, despite investigations, the Pain Physician prescribed muscle relaxants, anti-depressants and physiotherapy.

After prolonged periods of pain, Elaine was prescribed sleeping tablets to help her manage the situation. Since the pain was present now for more than 6 months, she was told she had “chronic pain”. Visits to the physiotherapists made the pain worse as the underlying cause was still not diagnosed.

Elaine sought opinions from other Pain Specialists, who all concluded she had arthritis-related pain and would just have to manage it. Over time Elaine noticed she had developed a slight hump in her upper back, so visited her GP and insisted on a referral for a bone density scan.  The result showed severe osteoporosis, so she was sent for an x-ray and this revealed a crush fracture in her spine!

Elaine was then finally referred to an Endocrinologist and Elaine now 55, has commenced treatment for her osteoporosis following this overdue diagnosis.  Elaine says she was relieved to finally have her diagnosis but she also felt frustrated and angry that she had been through such an ordeal.

Elaine is now passionate about raising awareness about osteoporosis and preventing others from going through the same experience.  Elaine is delighted to have welcomed young grandchildren into her life but says her osteoporosis diagnosis will limit a lot of what she can do with her grandkids.

“Now that my osteoporosis has finally been diagnosed and my bone health is being properly managed, I feel more positive about leading a more normal life.” Says Elaine. “My experience is a lesson to all. I urge doctors and anyone with risk factors for osteoporosis to be pro-active and take bone health and osteoporosis seriously.”